The NFL season is back underway and with it the annual conversation surrounding the ongoing head injury topic that continues to loom over the sport of American Football. While concussions in the NFL aren’t anything new, the resulting problems many players suffer from Chronic Traumatic Encephalopathy (CTE) has become something that the league could no longer ignore.

This season, the NFL has begun their attempts to find a solution to the problem, with 3D printing and artificial intelligence expected to play a key role in the changes made to the helmets used by players. While the helmets may look as though they protect the brain from impact, the truth is all they do is protect the player from cosmetic injury. Following impact, the brain moves inside the skull which, over time, can lead to CTE.

The new helmets contain a bespoke inner liner. This liner, which would be 3D printed, would use a lattice structure design that would allow the elastomeric polyurethane material to absorb and then dissipate the energy created at the point of impact to provide better cushioning and support.

Head injuries in football practices and games have, in recent years, inspired parents, players, protective gear manufacturers, and the National Football League to work together to attempt to solve this problem. The short-term goal is to reduce the chances of head concussions.

The new helmet with 3D-printed liners has already been tested by at least one player in every NFL team, as well as by some of the biggest university teams. If successful, all helmets in the league will contain these liners, and one of the biggest problems facing American Football may well be closer to being solved.

How sport is embracing 3D printing

The world of sport is increasingly embracing 3D printing, with… 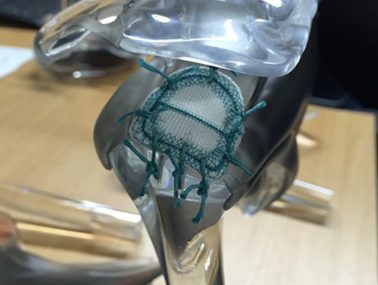 3D Printing in Medicine – The future is here

The world of healthcare has been at the forefront of innovative technology for years now, especially when it comes to 3D printing. The growth of additive manufacturing has opened up a huge number of doors to the industry, all of which present a range of benefits to medical science and the public.

There are many surprising ways 3D printing is currently being used. Here are Ogle’s current top 5.