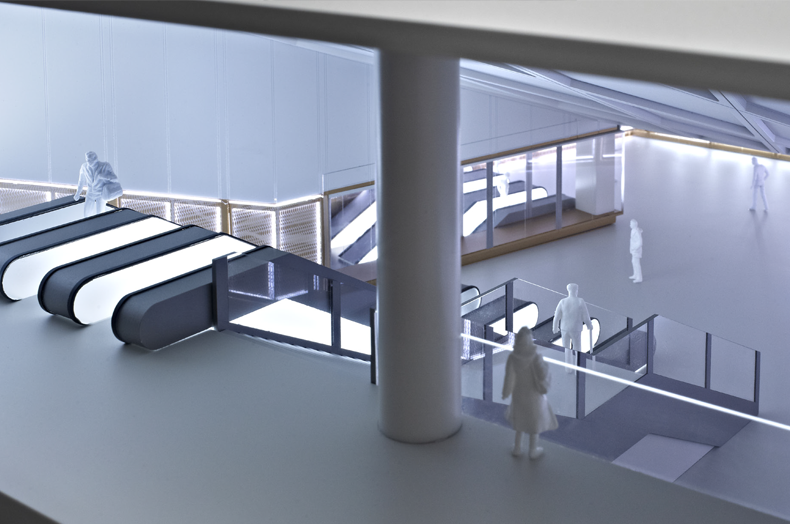 Ogle Models + Prototypes brings its superior quality model-making skills to bear on a complicated architectural model of the new Farringdon train station that is under development in London.

Crossrail is a major new cross-London rail link project that has been developed to serve London and the southeast of England.

Crossrail will support and maintain the status of London as a World Class City by providing a world-class transport system. The project includes a twin bore tunnel on a west-east alignment under central London and the upgrading of National Rail lines to the east and west of central London that will enable the introduction of a range of new and improved rail journeys into and through London.

The project includes the construction of seven central area stations, providing interchange with London Underground, National Rail and London bus services, and the upgrading or renewal of existing stations outside of central London. A significant addition to the transport infrastructure of London and the southeast of England, Crossrail will deliver improved services for rail users through the relief of crowding, faster journeys and the provision of a range of new direct journey opportunities.

Central to this project and the Thameslink project is the recently completed development of the Farringdon Station complex – which comprises of two platform tunnels, each 245m long, between new ticket halls to the east and to the west, called the East Ticket Hall (ETH) and the West Ticket Hall (WTH). At the western end, the WTH is combined with the Integrated Ticket Hall (ITH) of the Thameslink project, which has an entrance on Cowcross Street opposite the existing London Underground station.

The starting point was to construct a sturdy outer structure using white and clear acrylic materials. Onto this all the different elements of the model could then be added.

Again, the materials of choice were Perspex and clear acrylic to achieve the desired effect. As each part was constructed using the most appropriate process, it was added to the outer structure and the model took shape. Once completed it was all finished in Ogle’s dedicated finishing department to precisely match the colour specification as dictated by the brief.

Aedas Architects worked as part of a multidisciplinary team of engineers on the design of the station, which was procured on a Design-Build basis. In addition to the normal technical drawings that were produced and a ‘Design Intent’ document that conveys the ‘look and feel’ of the circulation space that was created – the team believed that a detailed scale model was desirable to fully amplify design intent and be particularly helpful for the Design-Build contractor that was brought on board.

For the production of the high quality, highly detailed model of the concourse at Farringdon the team turned to Ogle Models + Prototypes. Project Manager for this assignment was Dave Orman, who managed the model shop at Ogle. As you can see from the images of the final model, all the key intricate design features of the concourse had to be precisely reproduced in the 1/50 scale model. These features comprise a double storey building with a capacious northern entrance and a glazed eastern wall; saw-tooth-type skylights with north-facing glazing and vents orientated southwards; a ticket office, ticketing machines and ticketing gates; two lifts; and three escalators.

After an initial brain storming session with his team to identify the best production methods for the entire model, Dave decided that this project needed a hands-on approach adopting both advanced techniques involving laser cuttings and CNC machining with traditional methods that involve hand skills. The complexities of the model making process for projects such as this are something that Ogle is well-places to deal with, having a range of techniques available in house together with exceptional skill levels amongst the model makers employed.

The starting point was to construct a sturdy outer structure using white and clear acrylic materials. Onto this all the different elements of the model could then be added.
Again, the materials of choice were Perspex and clear acrylic to achieve the desired effect. As each part was constructed using the most appropriate process, it was added to the outer structure and the model took shape. Once completed it was all finished in Ogle’s dedicated finishing department to precisely match the colour specification as dictated by the brief.

The entire project took 150-man hours and has exceeded the expectations of the client. Soji Abass, Architect at Aedas Architects sums up this project:

When we approached Ogle Models, we only had some drawings and an artist’s impression to convey the ‘look and feel’ of the proposed interchange concourse. However, Ogle brought to bear an impressive range of techniques and materials to bring the scheme to life. In addition, the people at Ogle are a joy to work with.

An intricate 3D model of a valve system to boost engine operation and cut carbon dioxide output has allowed an automotive company to showcase its pioneering technology to the world.

When industrial designers Map and Mori Inc. were commissioned by Honda…